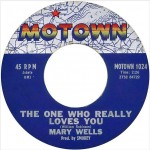 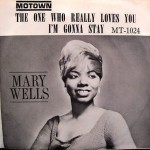 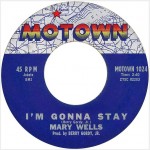 She was Motown’s first big star and a favorite of The Beatles , and songs like this Smokey Robinson penned gem that climbed to the #2 position of the R&B charts and the #8 position of the pop charts in 1962 are the reason why. Wells came to Motown after passing Berry Gordy a song demo that she had intended for Jackie Wilson to record. Gordy had her sing the song for him and was suitably impressed enough to have her record “Bye Bye Baby” and released it as her first single which climbed to #8 on the R&B charts in 1961.

After this success, Gordy teamed her up with Smokey Robinson. Today’s jukebox classic was one in a long line of hits composed specifically for Mary Wells by Smokey Robinson, that also included “My Guy,” You Beat Me To The Punch” and “Two Lovers” that established Wells as Motown’s first big star before  leaving the company at the height of her powers in 1964.

“The One Who Really Loves You” is one of the finest examples of Robinson’s compositional magnificence. The song features a super-catchy ear worm of a tune highlighted by Wells’ cool lilting vocal that projects just the right amount of adult sophistication aloft in the mix. It all comes to you backed by a Harry Belafonte- influenced Calypso beat and smooth harmony vocals by The Love Tones (Carl Jones, Joe Marls & Stanford Bracely) who recorded backing vocals on many Motown sessions in 1962, but were never afforded a single of their own. The song was from Wells’ 1962 album of the same name which also included hit single “You Beat Me To The Punch.”

The flip of the single is every bit as good as the A-side, and was culled from Mary Wells’ 1961 debut Motown album called Bye Bye Baby I Don’t Want To Take A Chance. The single was reissued in 1965 after Wells left the label with the sides flipped to minimal chart action.

Wells’ success came to an end at Motown after a dispute with the label over the royalties from her recording of “My Guy” which she claimed were used to promote The Supremes’ single “Where Did Our Love Go” rather than one of her own records. Wells freed herself from Motown giving up royalties from the records she recorded for the label and the use of her own likeness to promote them, and signed with 20th Century Fox records where she had little chart success.

After recording many good records for Atco, Jubilee and Reprise that failed to chart, Wells found herself back on the charts again in 1981 with the Disco hit “Gigolo.” More records followed for a succession of smaller record labels that offered little promotion until Wells was diagnosed with cancer in 1990. She also sued Motown for unpaid royalties and reached a settlement with the label. Wells succumbed to laryngeal cancer in July of 1992 at the age of 49 leaving a legacy of soulful gems in her wake that are ripe for reinvestigation.