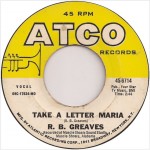 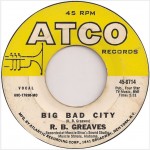 There’s always been a fine line between country and soul music (i.e. Charley Pride), but never has the line been so thin than on today’s Song Of The Day, “Take A Letter Maria” by R.B. Greaves which features a soulful mariachi-flavored horn part that would fit comfortably on both a country and soul track.

The song was recorded at Muscle Shoals Sound Studio in Alabama featuring their crack studio crew including Roger Hawkins on drums, Barry Beckett on electric piano, Eddie Hinton and Jimmy Johnson on guitars, David Hood on bass and Mel Lastie on trumpet. Most of the musicians on the record had recently broken away from FAME studios where they were featured on many Atlantic recordings to start out on their own.

David Hood: “It was our first big hit. First gold record after we had gone out on our own. We were getting pretty nervous, because we thought Atlantic was going to quit using us and we were going to go broke. So it was a big relief when R.B. Greaves came along. ‘Take a Letter, Maria’ was just a fluke. We all thought it was good when we cut it, but we didn’t think it was anything all that special. And here it becomes a hit.” (Song Facts)

The song was written by Greaves, but was recorded by both Tom Jones and Stevie Wonder before he committed it to wax at the insistence of producer and record label boss Ahmet Ertegun. It reached the #2 slot on the Billboard pop charts in August of 1969 and sold over a million copies. It also spawned two charting country covers by Anthony Armstrong Jones who brought the song to #8 in 1970, and Doug Stone who landed the song at #45 on the Country charts in 1999. The song has also been covered by the likes of New Riders Of The Purple Sage, Gary Puckett, Boots Randolph, Jimmy Ruffin, Mel Tormé and Country Dick Montana of the alt country group Beat Farmers.

The song was featured on the album R.B. Greaves which was produced by Ahmet Ertegun. David Hood: “He (Ertegun) was a tremendous recognizer of talent and of songs. He knew music and musicians about as well as anybody on earth, but he was very hands off. He sat in the control room…He had his feet propped up on the console and had a yellow legal pad in his lap. We thought, gosh, he’s making all these notes and doing all this stuff. And we go in there, and he’d just been doodling and drawing stars and stuff.” (Song Facts)

The album includes covers of Sam Cooke’s “Cupid” and “Ain’t That Good News,” and five songs that were penned by Greaves.  (R.B. Greaves was the nephew of Sam Cooke.) The flip of the single is another Greaves composition that did not turn up on his debut Atco album.

Greaves continued to have moderate chart success with such covers as Burt Bacharach and Hal David’s “There’s Always Something There To Remind Me” and Procol Harum’s “A Whiter Shade Of Pale” before leaving Atco Records in the early 1970s. His only other chart single was “Margie, Who’s Watching The Baby,” which bubbled under at #115 in 1972. Greaves died of prostate cancer in September of 2012 at the age of 68.