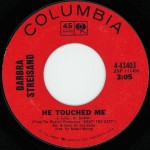 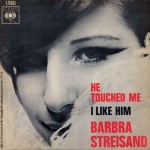 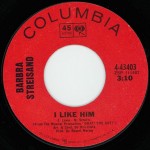 I’m not really a fan of Barbra Streisand, but you couldn’t grow up in suburban New Jersey in a middle class home with Jewish parents and not be surrounded by her “like buttuh” voice emanating from the Zenith stereo. Back in the day when there was a real musical generation gap between parents and kids, the sound of Streisand ringing through the walls of my bedroom was anything but music to my ears. To be perfectly honest, it’s not really her voice (which is sublime) that bothered me about ol’ Babs, it’s the shtick that comes with it that to this day, still makes my skin crawl.

However, I must give Streisand credit because she actually could (and still can) sing. After being bombarded by the likes of Katy Perry, Miley Cyrus and even Rhianna, whose recordings are so processed that any sense of reality have been squeezed out of the grooves, I’ve come to appreciate real vocal talent…and Streisand’s had it then, and still has it to burn today.

That said, there are a few Streisand recordings that have become part of my musical DNA, and one of them is the A-side of today’s jukebox classic. “He Touched Me” was the lead track on Streisand’s fourth album My Name Is Barbra…Two” which was released by Columbia Records in 1965. The album was the second soundtrack album from Streisand’s first TV special called My Name Is Barbra, but only the medley at the end of the album was actually featured in the show. The rest of the album was comprised of all-new Streisand recordings. The album peaked at #2 on the U.S. album charts and was certified platinum for over one million copies in sales. It was produced by Robert Mersey with arrangements by Peter Matz and Don Costa.

“He Touched Me” was written by Ira Levin and Milton Schafer, and was from the Broadway musical Drat! The Cat. The musical was about a cat burglar that was plundering the upper crust society folk of New York City during the late 1800s. The musical opened on October 10, 1965 and ran for only eight performances before closing. In the show, the song was called “She Touched Me” and was sung by Elliot Gould, who was Streisand’s husband at the time. Additionally, Columbia Records, which was Streisand’s record label, invested $50,000 into the show, which is probably why both sides of today’s jukebox single were comprised of songs from the show.

The single reached #53 on the singles charts in October of 1965. The flip of the single, “I Like Him” was also from Drat! The Cat and never appeared on a Streisand album. In England, “He Touched Me” was released as the flip side of the “Second Hand Rose” single which was also from the My Name Is Barbra…Two album.