You are here: Home / Music / Big Band / Song of the Day by Eric Berman – “The Nutcracker Suite” by Les Brown & His Band of Renown 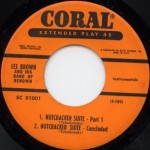 The story of The Nutcracker was inspired by E.T.A. Hoffmann’s The Nutcracker and the King Of Mice and was presented to Russian composer, Peter Ilyich Tchaikovsky, by Marius Petipa who was maître de ballet of the Imperial Theater from Dumas. Tchaikovsky was unmoved by the prospect of writing a ballet for the story and was practically strong-armed into doing so. Meanwhile, he was also writing an opera called Yolanta

Work on the ballet was put on hold when Tchaikovsky took a trip to America for the opening of Carnegie Hall. It was there he was introduced to the music of the celeste. A celeste is like a piano, but instead of mallets hitting strings like they do in a piano, celeste mallets hit metal plates giving the instrument a kind of woozy bell-like sound. The celeste inspired Tchaikovsky to write “The Dance of the Sugar Plum Fairy” and finish the ballet upon his return, so he could introduce the instrument to Russia. Upon its debut, The Nutcracker was widely panned, and the opera, Yolanta, was hailed as a great success…

Fast forward to 1957, by now Tchaikovsky’s Nutcracker is considered the classic it has rightfully become (does anyone remember Yolanta?), and arranger Frank Comstock writes this jazz arrangement of the piece for Les Brown & His Band of Renown to record. They, in turn, record it for the album Concert Modern and history is made again.

While I adore listening to the classical recordings of this gorgeous piece of music, especially Eugene Ormandy & the Philadelphia Orchestra’s late 1960s interpretation on the Columbia label, Les Brown takes the cake for recording the most satisfying and enjoyable adaptation of the piece. Today, the piece is kept current by annual performances by the very superb Brian Setzer Orchestra.