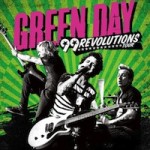 Can an artist who has been charged with being a party animal for an arena full of people still be the life of the party after coming off a stint in rehab?

That question was answered this evening when Green Day took the stage for their rescheduled 99 Revolutions Tour supporting three recent album releases Uno!, Dos!  and Tre!. And with the help of his two band mates Mike Dirnt and Tre Cool, plus longtime touring guitarist and new fourth member James White augmented by touring members Jason Freese on keyboards and saxophone and Jeff Matika on guitars, Billy Joe Armstrong managed to whip up a pretty cool party for the masses.

There was, however, an overall restlessness that prevailed over the show mostly revolving around Armstrong’s incessant shout outs to Chicago and Illinois (I lost count at 25), leading the crowd in numerous requisite “Day-O”s and call and response sing-alongs (too many to count), spraying the audience with a hose, tee-peeing the crowd with toilet paper, shooting t-shirts from the stage, leading the audience in arm swings, body sways and crowd waves. Heck, there were several times during this show when Armstrong sat himself down on the drum riser to take a breather while the crowd sang for him.

If this type of show is your thing, than Green Day is your band. Having seen Green Day now four times, the shtick gets a little old and somewhat saps the momentum the band generates from the music, even though it does get the kind of crowd reaction Armstrong apparently craves. And speaking of the crowd, the mix was old-timers like myself who have been with the band from the beginning, their kids (hey, I even took my then-12 year old daughter to see them back in 2006), and finally the thirty-somethings who came along for the ride when American Idiot took off.

For a band that is supposed to be supporting the three recent albums that came out between November and December of last year, they didn’t perform much from any of them. Each album has first-rate material, but out of a total of 37 tracks, they only performed seven songs leaving out future Green Day classics (to my ears at least) like “Carpe Diem,” “Let Yourself Go,” “Makeout Party” and “Nightlife.”

Instead we heard sing-along snippets of Guns ‘n’ Roses’ “Sweet Child Of Mine,” AC/DC’s “Highway To Hell,” The Rolling Stones’ “I Can’t Get No Satisfaction,” The Beatles’ “Hey Jude” and The Isley Brothers’ “Shout,” all crowd pleasers true, but at the expense of many great new Green Day songs.

With all that said, there was Green Day music and much of it was terrific. When Green Day was busy playing Green Day songs, they were at their best, specifically on “Basket Case,” “Minority,” “St. Jimmy,” “Boulevard Of Broken Dreams,” “Longview,” “When I Come Around,” “American Idiot” and “Jesus Of Suburbia.”

So, the answer is yes. Billie Jo Armstrong can still be the life of the party even after a much publicized stint in rehab. His voice was spot-on and as strong as ever, but his ever-increasing pandering to the crowd somewhat gets in the way of what the band does best, which is play rock and roll.