You are here: Home / Music / Classic Rock / Song Of The Day by Eric Berman – “5 O’Clock In The Morning” by Godley & Creme 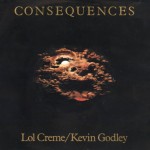 Kevin Godley and Lol Creme were one half of British 70s supergroup 10cc, along with Eric Stewart and Graham Gouldman. After the release of 10cc’s album “How Dare You” in 1976, Godley and Creme decided to leave the 10cc fold in order to record an album to promote an early guitar synthesizer they invented called The Gizmo. While the Stewart-Gouldman version of 10cc went on to score the huge hit, “The Things We Do For Love,” Godley and Creme worked on a three-record set called “Consequences.” The record was a six-sided sprawling curiosity at best, featuring lots of atmospheric instrumental music, a full story disc with Gizmo sound effects narrated by British comic Peter Cook, and a few songs including this, the most 10cc-like song in the collection. Even with assists from guest artists Sarah Vaughan and Mel Collins, and a deluxe box set presentation with booklet, the whole affair was pretty much dead on arrival. In retrospect, there are a few good songs that sound like the Godley & Creme we’d come to know…and while the album and The Gizmo never took off, they did recover over the next decade by producing hit videos for the likes of Sting, The Police, Frankie Goes To Hollywood and Duran Duran. They also scored a late 80s hit with their video and song, “Cry.”