You are here: Home / Music / Classic Rock / Song Of The Day – “A Caddy For Daddy” by Hank Mobley 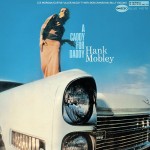 The title to this track really announces the hipness to be found within its grooves. With Lee Morgan on trumpet, Curtis Fuller on trombone, McCoy Tyner on piano, Bob Cranshaw on bass and Billy Higgins on the drums, this soulful strut wears its sense of sublime grooviness on its sleeve. While Coltrane had the propensity to go far out into the ozone with no return in sight, and Rollins’ gymnastic approach led the faithful to places they’d never gone before, Hank Mobley found himself on the smooth and lyrical side of tenor saxophone avenue, especially on this selection from his 1966 Blue Note album of the same name. Mobley came up through the Blue Note roster via The Jazz Messengers where he sessioned with Art Blakey, Horace Silver, Kenny Dorham and Doug Watkins. Mobley struck out on his own during the late 1950s resulting in over 20 albums for Blue Note label, while recording sessions with the cream of his label mates including Lee Morgan, Freddie Hubbard, Grant Green, Philly Joe Jones and many others. He even recorded with Miles Davis in 1961, replacing John Coltrane for Davis’ “Some Day My Prince Will Come” sessions and appearing on several of Davis’ live albums.