You are here: Home / Music / Classic Rock / Song Of The Day by Eric Berman – “A Change Of Horses” by Ian Anderson 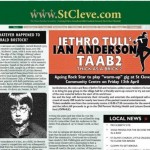 They said it couldn’t be done! Ian Anderson created a sequel to Jethro Tull’s classic 1972 album, “Thick As A Brick” answering the question “What ever happened to Gerald Bostock?,” the fictional character at the heart of the original album. Well, 40 years later and now we have “TAAB2” or “Thick As A Brick 2” released last week. I must admit I greeted this album with quite a bit of trepidation. How could you create a follow-up to one of the greatest Progressive Rock albums of all time, 40 years later no less, and make it sound relevant. Well folks, he didn’t…it’s not really relevant at all, nor does it try to be, but if you’re a fan of the original, you won’t be let down by its sequel. Derek Schulman, from the ‘70s Progressive Rock group Gentle Giant, convinced Anderson to create this album several years ago, and now Anderson will be promoting it on the road performing both “Thick As A Brick” albums in concert. It may take a few “animal deals” to get a ticket!