You are here: Home / Music / Song Of The Day by Eric Berman – “He’s My Baby” by Jean Shepard 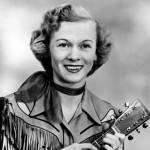 There was an interesting time during the late 1950s where straight Country ‘n’ Western music melded with then-burgeoning Rock ‘n’ Roll and Rhythm ‘n’ Blues, giving birth to classic Rockabilly. Capitol records was a hotbed for Rockabilly recording crossover artists like Ferlin Husky, Faron Young, Wanda Jackson, Hank Thompson, Jerry Reed, Gene Vincent and Skeets McDonald. Jean Shepard was a member of The Grand Ole Opry who scored her first #1 hit back in 1953 as a duet with Ferlin Husky called “A Dear John Letter” and followed it with the top 10 hit “A Satisfied Mind” a few years later. She went on to become a star of recorded music and variety show TV during the 1950s and recorded this early Rockabilly gem in 1958. She married Hawkshaw Hawkins in 1960 who would perish in the same plane crash that took Patsy Cline and Cowboy Copas. She went on to have country chart hits throughout the 1960s and 1970s and was inducted into the Country Music Hall Of Fame last year.