You are here: Home / Music / Big Band / Song Of The Day by Eric Berman – “A Porter’s Love Song To A Chambermaid” by Fats Waller 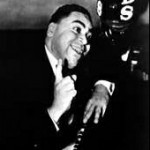 He was a master stride pianist, world class composer responsible for such classics as “Honeysuckle Rose,” “Ain’t Misbehavin’,” and “Jitterbug Waltz,” to name but a few, and a larger than life comedic performer whose jivey way with a song sometimes overshadowed his sheer artistry. He recorded hundreds of records for Victor and was so in demand, that in 1926 Waller was kidnapped by four men and taken to an inn owned by Al Capone. With a gun to his back, he was pushed to the piano and told to play. He proceeded to play at Capone’s birthday party for three days straight after which a very drunk Waller left the inn thousands of dollars richer due to the tips that were showered upon him. Here we have a 1934 recording composed by James P. Johnson and Andy Razaf about a relationship between a porter and a chambermaid. They just don’t write songs like this anymore…