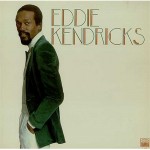 Originally a member of The Primes (to the Supremes’ Primettes), Kendricks possessed one of the most soulful voices in the group that would later be renamed The Temptations. His angelic falsetto voice climbed the charts numerous times on such classics as “Just My Imagination,” “My Girl,” “Ain’t Too Proud To Beg,” “Get Ready” and dozens of others too numerous to mention here. He left the Tempts to go solo in 1971 topping the charts in 1973 with this classic that ushered in the era of Disco. This is the long album version of the song for maximum boogie pleasure!