You are here: Home / Music / Indie / Song Of The Day by Eric Berman – “America!” by Bill Callahan 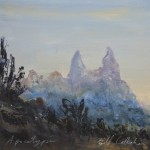 He’s the artist sometimes known as “Smog” who has spent most of his career releasing some very quirky records. As Smog, Callahan has released 14 lo-fi albums since 1990 laced with very repetitive, simplistic and challenging music featuring strange instrumental combinations, lots of dissonance and sparse lyrics if any at all. He has also released four albums under his own name that are more conventional in instrumentation but still pretty quirky. While he’s not from Chicago, he is afforded a hometown welcome whenever he plays here due to the fact that he’s recorded exclusively for Chicago’s own Drag City records since the beginning of his career. This clip is from one of the cooler Chicago venues, the intimate Lincoln Hall and it was recorded last July. You can find the studio version of this song on his 2011 album called “Apocalypse” which was one of that year’s very best releases.