You are here: Home / Music / Song Of The Day by Eric Berman – “America The Beautiful” by Ray Charles 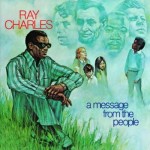 By1972, the year he recorded his Gospel-tinged version of “America The Beautiful,” Ray Charles’ career was deeply in decline. It had been many years since his last hit and his recording contract with ABC was coming to an end. Indeed, the “A Message From The People” album that originally contained this song sank without a trace. Charles was in bad need of direction with the socially conscious sounds of Motown stars like Marvin Gaye and Stevie Wonder quickly making him sound very passé. It was indeed a cover of Stevie Wonder’s “Living For The City” that brought Charles a Grammy in 1974, followed by a reunion with Jerry Wexler at Atlantic Records in 1974 that turned his fortunes around. In the meantime, this version of a song many believe would make a better national anthem than “The Star Spangled Banner” quietly gained the “classic” status it enjoys today.