You are here: Home / Music / Indie / Song Of The Day by Eric Berman – “Awake” by Canyons Of Static 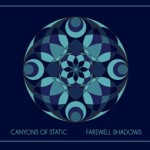 Not only do they make the most tasty contemporary mood music around, they also possess the coolest band name in all of rock! Canyons Of Static’s brew of instrumental “shoegaze” music built on layers of feedback is experimental, challenging and downright exciting to listen to. The band consists of husband and wife Ross and Aggie Severson (guitar and keyboards respectively), Chris Biertzer on bass and drummer Nathan Gaffney and hail from West Bend, Wisconsin. Their new record is called “Farewell Shadows” and it was released back in January. In concert, the band are a multi-media extravaganza featuring homemade projected films on multiple screens that complement the din and rush emanating from the stage.