You are here: Home / Music / Song Of The Day by Eric Berman – “Barracuda” by Cliffie Stone 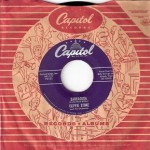 Talk about your double entendre record…well, I’ve never! This rude but somewhat right Rockabilly stomper by Cliffie Stone would never get passed the censors of today. Perhaps they didn’t know any better back in the late 1950s… Country musician, Stone was one of the first A&R guys at Capitol Records back in the late 1940s discovering Tennessee Ernie Ford and Hank Thompson. His TV show, “Hometown Jamboree,” became a launching pad for Eddy Arnold, Johnny Cash, Lefty Frizzell, Johnny Horton, Ferlin Husky, Jim Reeves, Merle Travis, Tex Ritter and dozens of other artist who gained notoriety by appearing. He was also a pioneer of Rockabilly music recording numerous sides for Capitol that bridged the gap between country and rhythm ‘n’ blues.