You are here: Home / Archives for A Capitol Rockabilly Party Volume 1

Talk about your double entendre record...well, I've never! This rude but somewhat right Rockabilly stomper by Cliffie Stone would never get passed the censors of today. Perhaps they didn't know any better back in the late 1950s... Country musician, Stone was one of the first A&R guys at Capitol Records back in the late 1940s discovering Tennessee Ernie Ford and Hank … END_OF_DOCUMENT_TOKEN_TO_BE_REPLACED 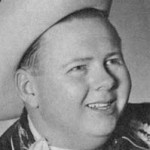 Song Of The Day by Eric Berman – “Sebbin Come Elebbin” by Jimmy Heap I recently spent some time with the first volume of A Capitol Rockabilly Party. The three-part compilation spans over 90 tracks and was released in the late 1990s by a CD reissue company in the Netherlands called Disky. Disky’s forte was extensively reissuing lots of great rare sides from the storied vaults … END_OF_DOCUMENT_TOKEN_TO_BE_REPLACED