You are here: Home / Music / Alternative / Song Of The Day by Eric Berman – “Bicycle” by Unknown Mortal Orchestra 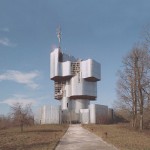 Every year after the Pitchfork Music Festival in Chicago, I come home with a list of artists that I hadn’t heard before who were great to listen to on stage. After further investigation some of them have released great records that had fallen under my radar, others, not so much. Some of the acts I first heard at Pitchfork include Fleet Foxes, Dodos, tUnE-yArDs and Battles, all of whom I’m still listening to today. This year’s finds included New York City band Cults and Portland Oregon based (by way of New Zealand), Unknown Mortal Orchestra. UMO is the brain child of Ruban Nielson, formally of the band Mint Chicks, who counts artists as diverse as Captain Beefheart and Sly Stone as major influences. Their sound is an amalgam of gauzy sounding neo-psychedelic acts like MGMT, Ween, Apples In Stereo and Ariel Pink’s Haunted Graffiti. Their self-titled debut album casually ingratiated itself with me over several plays until I found I couldn’t live without hearing it incessantly. The otherworldly building featured on the album cover is a monument in Yugoslavia built in the 1960s called Spomeniks.