You are here: Home / Music / Song Of The Day by Eric Berman – “Boy Meets Girl” by Anoushka Shankar 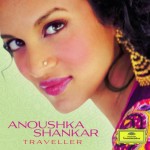 To say Anoushka Shankar was raised around a musical family is a bit of an understatement. She is the daughter of sitar master Ravi Shankar and the half-sister of Norah Jones. Anoushka learned to play the sitar from her father and began performing with him around the world at the age of 14. Although born in London, Shankar spent much of her childhood in Delhi, India and Encinitas, California. She has recorded several amazing records including the album where this song comes from, her latest called “Traveller.” [sic] She has performed and recorded with Sting, Jeff Lynne, Phillip Glass, Peter Gabriel and Eric Clapton. She was also the opening act at “The Concert George” which paid tribute to family friend, George Harrison.