You are here: Home / Music / Classic Rock / Song Of The Day by Eric Berman – “Cecilia” by Simon and Garfunkel 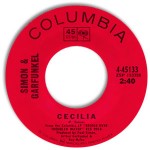 This song, from Simon and Garfunkel’s “Bridge Over Troubled Water” album, was written in the same house on Blue Jay Way in Los Angeles that George Harrison rented, and named a Beatles’ song after. The percussive track was formed by recordings of Paul and Art slapping their thighs while others thumped on a piano bench, dropped bundled drum sticks in an echo-laden room and strummed guitars with slackened strings. From this, producer Roy Halee created the musical bed for one of Simon and Garfunkel’s most joyous and catchy songs. The song was not a paean to an elusive love named Cecilia, but rather the Cecilia of this song was the patron saint of music in the Catholic tradition and the song was about the trials and travails of songwriting. Simon would revisit St. Cecelia again in his song “The Coast” from his 1990 “The Rhythm Of The Saints” album with the lyric “A family of musicians took shelter for the night in a little harbor church of St. Cecelia.”