You are here: Home / Music / Classic Rock / Song Of The Day by Eric Berman – “Foreigner Suite” by Cat Stevens 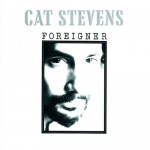 Here’s a rare live version of Cat Stevens’ “Foreigner Suite” performed in its entirety for ABC TV’s “In Concert.” By 1973, Stevens was coming off a very successful run of records including “Mona Bone Jakon,” “Tea For The Tillerman,” “Teaser And The Firecat” and “Catch Bull At Four,” that were all recorded with pretty much the same band and producer. The release of “Foreigner” found Stevens jettisoning much of his musicians, branching out musically with this multi-section extended piece, turning his attention toward spiritual matters lyrically and taking on the production chores for himself. Musically, the suite featured many different sections melded together into a whole and was much in the same vein as fellow 1973 releases, “Band On The Run” by Paul McCartney and “A Passion Play” by Jethro Tull. While “Foreigner” was much maligned upon its release and sold poorly, Stevens bounced back with his follow up record “Buddha And The Chocolate Box.” In 2009, Stevens sued Coldplay for plagiarizing the melody of the final segment of “Foreigner Suite” with their song “Viva La Vida.”