You are here: Home / Music / Doo Wop / Song Of The Day by Eric Berman – “Close Your Eyes” by The Five Keys 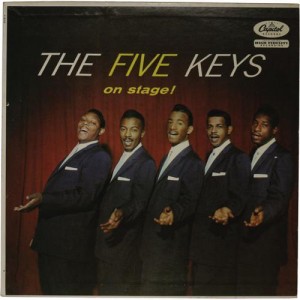 They were originally formed as The Sentimental Four out of Hampton News, VA and they consisted of two sets of brothers: Rudy and Bernie West, and Raphael and Ripley Ingram. Their first recordings were for the Aladdin Record label although the line-up changed when Rudy West went into the Army. At this point they added Maryland Pierce and Dickie Smith on vocals and changed their name to The Five Keys. Several line-up changes ensued until Rudy West returned from the army and to the group and they signed to Capitol Records where they had their greatest success.  While this 1955 song wasn’t one of their big hits like “Ling Ting Tong” and “Wisdom Of A Fool,” it is still considered one of their best featuring lead vocals by Maryland Pierce with Rudy West on the answer vocals. Controversy struck when Capitol Records released the album “The Five Keys On Stage.” Apparently, some mistook Rudy West’s thumb for a phallus (see the first guy all the way on the left side of the cover) and the cover was recalled and airbrushed. If you look closely on this photo, you can see the offending appendage.