You are here: Home / Music / Jazz / Song Of The Day by Eric Berman – “Cloud Nine” by Mongo Santamaria 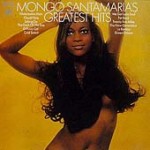 The song was written by Norman Whitfield and Barrett Strong and originally recorded by The Temptations. This recording was released as a single back in 1969 by Cuban-born Latin Jazz percussionist, Mongo Santamaria and featuring some blazing sax work by Grant Reed. Mongo was most famous for his recording of Herbie Hancock’s “Watermelon Man” and for writing the John Coltrane standard “Afro Blue.” He also played with the legendary Fania All-Stars, Tito Puente, Cal Tjader and Perez Prado. He was a purveyor of boogaloo music fusing soul and Latin jazz also made famous by Ray Baretto’s “El Watusi.”