You are here: Home / Music / Indie / Song Of The Day by Eric Berman – “Andrew In Drag” by Magnetic Fields 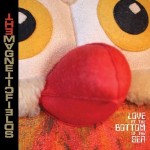 Stephin Merritt is one of today’s greatest songwriters. Whether solo or with Magnetic Fields, The Gothic Archies, The 6ths or Future Bible Heroes, Merritt has given us hundreds of great songs over the years with a Broadway sensibility, deadpan delivery and a droll sense of humor. He’s even released a soundtrack to the “A Series Of Unfortunate Events” books with none other than author Lemony Snicket. This one comes from Magnetic Fields’ upcoming March release called “Love At The Bottom Of The Sea.” Beginners should start with his three CD magnum opus, “69 Love Songs,” although you really can’t go wrong with any of his releases.