You are here: Home / Music / Alternative / Song Of The Day by Eric Berman – “Dinosaur/The Red House/Wheezing/Eggs In A Briar Patch” by David Byrne 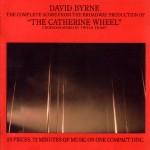 It was a creative peak for David Byrne. Talking Heads were coming off their hugely successful “Remain In Light” album and expanded band tour. Byrne had been collaborating more and more with Brian Eno, much to the chagrin of the rest of the band. By 1981, Byrne and Eno released their experimental “My Life In The Bush Of Ghosts” album that mixed samples of found recordings with funk backing tracks. Their landmark use of sampling predated its use in rap and hip hop music. It was within this atmosphere in 1981 that choreographer Twyla Tharpe commissioned David Byrne to compose a score for her dance piece called “The Catherine Wheel.” Byrne composed a 70-minute score that was released in its entirety on CD and cassette, while the vinyl version only featured about 40 minutes of music. For the recording of this project, Byrne gathered many of the musicians who worked with him in the expanded Talking Heads, including Heads member Jerry Harrison on keyboards, Adrian Belew on guitar, Brian Eno on numerous instruments, Yogi Horton on drums, Dolette McDonald on vocals, Steve Scales on percussion and Bernie Worrell, also on keyboards. With the exception of “Eggs In A Briar Patch,” today’s Song Of The Day focuses on some of the incredibly inventive instrumental pieces Byrne composed for the dance. “The Catherine Wheel” opened on September 22, 1981 at the Winter Garden Theater in New York City. Several of the tracks including “Big Blue Plymouth Eyes,” “My Big Hands (Fall Through The Cracks),” “Big Business” and “What A Day That Was” found their way into the Talking Heads’ repertoire and were performed extensively on the band’s 1982-1983 “Stop Making Sense” tour.