You are here: Home / Music / Classic Rock / Song Of The Day by Eric Berman – “East Of Ginger Trees” by Seals & Crofts 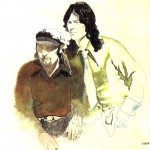 The duo of Jim Seals and Dash Crofts were one of the most successful soft rock groups of the 1970s. The duo hailed from Texas and after gigging around they both joined The Champs of “Tequila” fame as touring members of the group. Glen Campbell was also a member of the group and the three of them left and formed the group Glen Campbell and the GC’s. After the demise of the GC’s, Seals & Crofts decided to go it alone as a duo with Seals on guitar, violin and saxophone and Crofts on guitar and mandolin. It was around this time they began to follow the Baha’i Faith. After releasing several albums that didn’t go anywhere, they finally hit with the album “Summer Breeze” that properly highlighted their heavenly harmonies and songwriting chops. The title track became a top-ten hit, but the album also included such gems as the song “Hummingbird” and this one. From there, the sky was the limit with the hits “Diamond Girl,” “Get Closer,” “We May Never Pass This Way (Again)” and “Hummingbird.” While I was a huge fan of their records, the duo lost me with the release of the 1974 album “Unborn Child” and it’s stance against abortion. They broke up in 1980 and have reformed sporadically over the years. They are long overdue for a reunion.