You are here: Home / Music / Jazz / Song Of The Day by Eric Berman – “Eli’s Comin’” by Maynard Ferguson 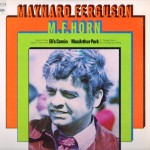 He was considered one of the top “screech” trumpeters in Jazz, a style that was typified by a proclivity to spend an unfathomable amount of time playing in the upper registers of his instrument. But Maynard Ferguson was much more than just a screech trumpeter, he was also an educator and perhaps the most popular big band leader of the 1970s. While touring the concert halls of the world, he also took time out to perform hundreds of shows in high school and college auditoriums where he made it his mission to educate kids about Jazz. As a result, many young players got their start in Ferguson’s bands. Ferguson got his start playing in the big bands of Jimmy Dorsey and Charlie Barnett before joining Stan Kenton’s band in 1950. Although he wasn’t their lead trumpet player, he was afforded numerous solos because he could create excitement by playing in the highest registers of his instrument. After his work with Kenton, he took a job with Paramount pictures where he recorded over 40 film soundtracks including “The Ten Commandments.” In the early 1960s, Ferguson and his wife joined Timothy Leary and his Harvard friends and lived on an estate in Millbrook, NY where he experimented with numerous psychedelics including LSD. After a few years living in England, he came back to the states to set up his own big band. He released many albums during the ‘60s and ‘70s as a band leader, where he focused on performing big brass versions of the hits of the day. Here’s his 1970 Pop-Jazz version of the Laura Nyro classic, “Eli’s Comin’,” that was later made famous by Three Dog Night. It is from his first in a long string of “M.F. Horn” albums that had a profound influence on such rock acts as Blood Sweat & Tears, Chicago and Chase. Ferguson went on to lead his big band and perform in concert with hundreds ofartists until his death in 2006.