You are here: Home / Music / Alternative / Song Of The Day by Eric Berman – “Go Outside” by Cults 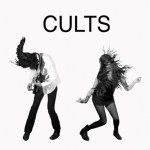 One of the best new discoveries I made a few weeks ago at this year’s Pitchfork Music Festival in Chicago was the band called Cults. Cults started life as the duo of Madeline Follin on vocals and Brian Oblivion on guitar, keys and drums who were both students from The New School in New York City. Their girl group inspired sound got them noticed by the Pitchfork Music Website in Chicago after they self-released several songs including this one on an EP back in 2010. They were quickly signed to British pop star Lily Allen’s ITNO (In The Name Of) record label and released their debut album, also called “Cults,” last summer. By the time they appeared at the Pitchfork festival this summer, their ranks expanded to a five-piece band.