You are here: Home / Music / Jazz / Song Of The Day by Eric Berman – “For Mods Only” by Chico Hamilton 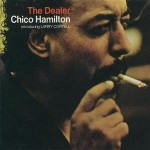 Sixties jazz tunes don’t come any more “Austin Powers” than this raver by Chico Hamilton from 1966. Hamilton spent the years working up to this recording gigging and recording with the likes of Eric Dolphy, Jim Hall, Gabor Szabo, Charles Mingus, Duke Ellington, Count Basie, Nat Cole, Billie Holiday, Gerry Mulligan and numerous others. In 1966 he joined forces with Archie Shepp on piano, Arnie Lawrence on saxophone, Richard Davis on bass and (introducing) Larry Coryell on guitar for this swingin’ stunner from the Impulse album called “The Dealer.” Hamilton continued to record throughout the 70s, 80s, 90s, 00’s and went into the studio on the advent of his 90th birthday to cut 28 new tracks, released in 2011 on the “Euphoric EP” and the “Revelation” CD.