You are here: Home / Archives for Chico Hamilton

Song Of The Day - "Freeway" by Gerry Mulligan Quartet Some of the greatest Jazz the West Coast had to offer from the very first release by Pacific Jazz Records. I've got this one on a 10" heavy vinyl microgroove record from 1952: catalog number PJLP-1! What a line up: Gerry Mulligan on the tenor sax, a young Chesney (Chet) Baker on trumpet, Chico Hamilton on drums and Von … END_OF_DOCUMENT_TOKEN_TO_BE_REPLACED 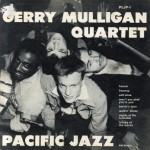 Here is some of the greatest the West Coast had to offer, from the very first release by Pacific Jazz Records! I scored an original 1952 10” pressing of this one (Pacific Jazz catalog number PJLP-1) on heavy microgroove vinyl in a garage sale many years ago! Not only did this record signal a bright new beginning for a Jazz record label that would become a force to be … END_OF_DOCUMENT_TOKEN_TO_BE_REPLACED

The innovative instrumentation and arrangements of Miles Davis’ landmark Birth Of The Cool nonet sessions from 1948, on which Gerry Mulligan played baritone saxophone, was a major influence on Mulligan’s Tentette recordings from January of 1953 that included “Simbah,” today’s Song Of The Day. But even though the Tentette recordings are less well known than the storied Birth Of … END_OF_DOCUMENT_TOKEN_TO_BE_REPLACED