You are here: Home / Music / Classic Rock / Song Of The Day – “Free Man In Paris” by Joni Mitchell 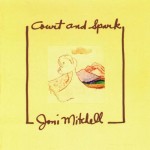 I watched the PBS “American Masters” documentary on David Geffen today for the second time. Geffen was the guy who signed one of my all-time favorite singer-songwriters, Laura Nyro, whom he championed and cut deals making sure that the likes of Three Dog Night, The Fifth Dimension and Blood Sweat and Tears recorded hit versions of her songs establishing her as a star in her own right. Geffen was also the guy responsible for cutting the deal that got Crosby, Stills and Nash out of each of their respective record deals, allowing them to record their first record together for Atlantic Records. When Geffen started his own Asylum record company in the early 1970s, he signed the likes of Joni Mitchell, Tom Waits, Jackson Browne and Eagles to the label. Geffen and his partner Elliot Roberts not only managed the aforementioned artists, but became friends with them as well. By 1973, Geffen tired of being the father figure to all of his artists and abruptly sold his label to Warner Bros. While this by no means meant he was finished with the music business or his roster of artists, it did put some much-needed distance between him and them. Right after the sale of the label, Geffen and Joni Mitchell vacationed together in Paris where Joni Mitchell wrote this song about David Geffen’s newly found freedom. In the documentary, Geffen explains that he felt exposed by the song, but heck, not many people have songs written about them by  Joni Mitchell…especially a hit song. Geffen would come back from Paris to head up the newly merged Elektra/Asylum label. After that came Geffen Records (John & Yoko, Peter Gabriel, Elton John, Donna Summer, Neil Young, Joni Mitchell) and then the David Geffen Company (Nirvana, Sonic Youth) before he moved on to the business of movies (“Risky Business,” “Shrek”)  and Broadway (“Dreamgirls,” “Little Shop Of Horrors” and “Cats”). If you are a music fan and haven’t seen this documentary yet, I urge you to catch it on demand if you can.