You are here: Home / Archives for Joni Mitchell

1968, Pink Floyd announced founder Syd Barrett had officially left the group. Barrett was suffering from psychiatric disorders compounded by drug use. 1968, Simon and Garfunkel went to number one on the US album chart with the soundtrack of Mike Nichols' movie The Graduate, starring Dustin Hoffman and Anne Bancroft. The film boosted the profile of the folk-rock duo and on … END_OF_DOCUMENT_TOKEN_TO_BE_REPLACED 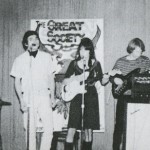 1966, The Who appeared at the Locarno Ballroon in Stevenage, England. This UK tour was notable for the addition of the single, "I'm A Boy" to the band's repertoire. 1968, Pink Floyd were forced to cancel a performance at the Chatelet Teenage Festival in Belgium due to work permit problems.  There were some violent reactions from the fans, but the several other bands, … END_OF_DOCUMENT_TOKEN_TO_BE_REPLACED

1965, The Byrds appeared at the Hollywood Palladium, Hollywood, California. 1965, Sonny & Cher were at number one on the UK singles chart with "I Got You Babe," the duo's only British chart topper. Sonny Bono was inspired to write the song to capitalize on the popularity of the term "babe," as heard in Bob Dylan's "It Ain't Me Babe." 1967, Mick Jagger and Marianne … END_OF_DOCUMENT_TOKEN_TO_BE_REPLACED

1964, The High Numbers, (The Who) played at The Scene in Soho London, England. 1964, The Beatles kicked off a North American tour at the Cow Palace in San Francisco, California, to a crowd of 17,130. Playing 12 songs which made up their repertoire for the entire tour: Twist and Shout, You Can't Do That, All My Loving, She Loves You, Things We Said Today, Roll Over Beethoven, … END_OF_DOCUMENT_TOKEN_TO_BE_REPLACED