You are here: Home / Music / Classic Rock / Song Of The Day by Eric Berman – “Freeway Jam” by Jeff Beck 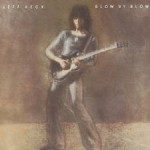 Nothing prepared rock fans for the transformation that took place in the mid-70s when Jeff Beck joined forces with producer George Martin on his albums “Blow By Blow” and “Wired.” Beck, of course, was well known as the blues-based British rocker from the Yardbirds and The Jeff Beck Group who dabbled in jazz, but cut his teeth on what is now considered classic rock. By 1975, Beck’s band consisted of Phil Chen on bass, Richard Bailey on drums and Max Middleton, the sole holdover from The Jeff Beck Group, on keyboards. The sound was full-on instrumental Fusion Jazz which was previously the domain of Miles Davis, Weather Report and Chick Corea with Return To Forever. Beck’s foray into Fusion culminated with several records pairing his guitar work with the keyboard mastery of Jan Hammer.  “Freeway Jam” was written by Max Middleton and is from the album “Blow By Blow.” The album featured an assist from Stevie Wonder who played keyboards on the track “Thelonious.” Beck had previously performed guitar duties on Wonder’s “Talking Book” album.