You are here: Home / Archives for Jeff Beck

1966, Grace Slick performs as a member of Jefferson Airplane for the first time at San Francisco's Fillmore West after Signe Anderson bows out of the group's lineup. Slick, who was with fellow San Francisco band Great Society, introduces the band to two new songs, her composition "White Rabbit," and "Somebody to Love," written by her then brother-in-law Darby Slick. 1967, … END_OF_DOCUMENT_TOKEN_TO_BE_REPLACED

1965, The Byrds appeared at the Hollywood Palladium, Hollywood, California. 1965, Sonny & Cher were at number one on the UK singles chart with "I Got You Babe," the duo's only British chart topper. Sonny Bono was inspired to write the song to capitalize on the popularity of the term "babe," as heard in Bob Dylan's "It Ain't Me Babe." 1967, Mick Jagger and Marianne … END_OF_DOCUMENT_TOKEN_TO_BE_REPLACED

1968, The Jackson Five signed a one-year contract with Motown Records. 1968, Decca pulls the Rolling Stones' Beggars Banquet from its release schedule, citing problems with the sleeve. The design features a graffiti-covered toilet. It's one of the first disagreements between the band and the label, with Mick Jagger angrily pointing out that Decca released Tom Jones' A-tom-ic … END_OF_DOCUMENT_TOKEN_TO_BE_REPLACED

1966, David Bowie and The Lower Third appeared at The Lion Hotel in Warrington, England, (they were paid £30 for the gig). Also appearing was The Powerhouse which featured Eric Clapton Jack Bruce, Steve Winwood and Paul Jones. 1967, Jeff Beck, Cream and John Mayall all appeared at London's Saville Theatre. 1967,  Jimi Hendrix performed at the Whisky A Go-Go in Los … END_OF_DOCUMENT_TOKEN_TO_BE_REPLACED 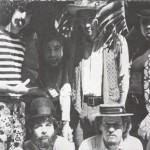 1966, The Mothers of Invention support comedian Lenny Bruce at San Francisco's Fillmore Auditorium. 1966, At the Cow Palace, the Beach Boys' Summer Spectacular features performances by the Jefferson Airplane, the Lovin' Spoonful, Percy Sledge, the Byrds, and the Sir Douglas Quintet. 1966, After holding a press conference aboard a yacht in New York City, The Rolling Stones … END_OF_DOCUMENT_TOKEN_TO_BE_REPLACED