You are here: Home / Music / Electronic / Song Of The Day by Eric Berman – “Quarantined” by Atlas Sound 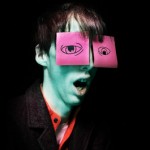 Up until a few days ago, I had heard of Atlas Sound but never heard them. Andrew Freedman, a Facebook friend of mine whose father was a good concert buddy of mine in the 1970s, posted this on his page as one of his “Daily Music” posts. When I pushed play, I was promptly whisked away to another musical place…a place I want to return to again and again. Atlas Sound is the name Bradford Cox uses for his solo work when he is not recording with his band Deerhunter. The Atlas Sound material is far more psychedelic and stream of conscious than the more concrete material he records with Deerhunter. This song comes from the first Atlas Sound record from 2008 called “Let The Blind Lead Those Who Can See But Cannot Feel.” I do believe I’m going to become a huge Atlas Sound and Deerhunter fan in the near future. Thanks Andrew!