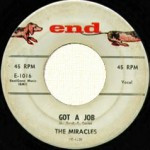 Before there was The Miracles, before there was Berry Gordy and before there was Motown, a talented singer and aspiring songwriter named William Robinson formed a group called The Matadors. The Matadors consisted of Bobby Rogers, Ronnie White, Warren Moore, and Claudette Rogers. They met a hungry promoter named Berry Gordy who had his first taste of success by writing the Jackie Wilson hit “Reet Petite.” The Matadors auditioned for Gordy who liked the group, especially their lead singer. When Williams told Gordy that he could write songs, the two sat down and wrote an answer record to The Silhouettes’ 1958 hit “Get A Job.” Gordy thought the name, The Matadors, was far to masculine for a group that featured a vocalist like William Robinson and also a female vocalist, so he changed their name to The Miracles. Gordy negotiated a release of the record on the independent End record label in 1958 and it became a minor hit. With the money earned from the hit record, Gordy went on to found the Motown record label making Robinson the vice-president…so you may say that both Gordy and Smokey Robinson (as he became known) “Got A Job” with the release of the record of the same name.