You are here: Home / Music / Blues / Song Of The Day by Eric Berman – “Had You Told It Like It Was (It Wouldn’t Be Like It Is)” by Albert King 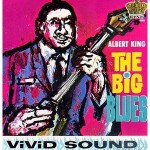 Like Jimi Hendrix after him, Albert King had a unique guitar sound due to his playing of a right handed guitar upside down with his left hand. In King’s world, he was pushing up on the strings a righty would normally push down on. His style was an inspiration to the likes of Robert Cray, Stevie Ray Vaughan and Eric Clapton. While he’s best known for his late ’60s STAX Records classics like “Born Under A Bad Sign,” “Cross Cut Saw” and “Laundromat Blues,” this song is from much earlier in his career. He began recording under his own name for the Bobbin Record label whose recordings were leased to King Records for release. In 1962, King released the album “The Big Blues” that featured this R’n’B classic. While sales were meager and the hits were slim, his recordings from this period are every bit as good as the ones he cut for STAX.