You are here: Home / Music / Classic Rock / Song Of The Day by Eric Berman – “Hey Hey My My (Into The Black)” by Devo w/Neil Young 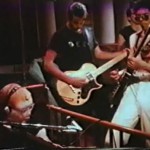 Q: Where do the worlds of The Kingston Trio, Devo and Neil Young all collide? A: Why, on “Human Highway,” of course! “Human Highway” was a mostly dreadful film released by Bernard Shakey (aka Neil Young) in 1982. The film starred Neil Young, Dean Stockwell, Dennis Hopper, Russ Tamblyn and Devo and was filmed between 1978 and 1981. It was briefly shown in movie theaters upon its release and was never to be seen again until its home video release in 1995 on VHS. It is currently out of print. While the movie is quirky and mostly incoherent, it is also very funny and somewhat entertaining in places. Devo were cast as Nuclear Garbagepersons, but getting into the convoluted plot that deals with a nuclear power plant and the last day on earth would be as convoluted as watching the film again. Devo can be seen performing the Kingston Trio classic “Worried Man Blues” on the back of a truck and “Hey Hey My My (Into The Black)” with Mark Mothersbaugh in his “Booji Boy” guise and Neil Young on guitar. In fact, it was in this performance that Mothersbaugh first uttered the words “rust never sleeps” that gave Young the title to his next record.