You are here: Home / Music / Alternative / Song Of The Day by Eric Berman – “I Can’t Stand It” by Chris Whitley 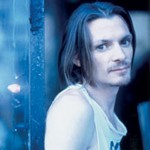 Chris Whitley’s short, restless career encompassed folk, noise rock, jazz, country, mainstream rock and the blues. He was discovered by producer Daniel Lanois who helped him score a major label record deal with Columbia Records in 1988. His first album, “Living With The Law” was a mainstream rock affair with good songs that gave him radio exposure, but it wasn’t until his second album and third albums, “Din Of Ecstasy” and “Terra Incognita” that Whitley came into his own with great songs ensconced in noise. After being dropped by Columbia he began releasing records independently including his covers album “Perfect Day” where he was backed by Jazz musicians Chris Wood (of Medeski, Martin & Wood) and Billy Martin. He also released some terrific acoustic records that are well worth seeking out. Not only was Whitley a great songwriter, he also had a knack for choosing interesting covers by artists like Bob Dylan, Kraftwerk, Gary Numan, Prince, The Clash, Nat King Cole, The Doors and many others. Here we have “I Can’t Stand It” one of his more inspired choices by The Velvet Underground from his album “War Crime Blues.” Whitley died of lung cancer in 2005. He leaves behind his daughter, Trixie who has recorded several records under the name Black Dub with Daniel Lanois.