You are here: Home / Music / British Invasion / Song Of the Day by Eric Berman – “I’m Into Something Good” by Herman’s Hermits 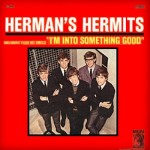 They were the brain child of producer Mickie Most, the man who was also behind The Animals, Donovan, Suzi Quatro and the Jeff Beck Group…and they did have the mildly attractive Peter Noone as a lead singer. Still, it’s hard to believe that Herman’s Hermits gave The Beatles a run for their money during the early days of the British Invasion when they sold over ten million albums and singles over a 12 month period. This song comes from their debut album, “Introducing Herman’s Hermits” that also included the hits “Mrs. Brown You’ve Got A Lovely Daughter,” “Sea Cruise” and “Mother-In-Law.” Here’s a vintage clip of “I’m Into Something Good” from “Shindig!”