You are here: Home / Music / Song Of The Day by Eric Berman – “It Don’t Come Easy” by Bettye LaVette 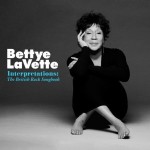 Bettye LaVette had several deep soul hits back in the early 1960s including the 1962 top-ten “My Man, He’s A Lovin’ Man” and 1965’s “Let Me Down Easy.” She then sank into obscurity for nearly 40 years. She was rediscovered by European soul fans in 2000 resulting in several critically acclaimed comeback albums. Here she is singing her version of the Ringo Starr classic in New York City. She was touring behind her latest album called “Interpretations: The British Rock Songbook” a very daring record she made covering songs by Pink Floyd (“Wish You Were Here”), The Beatles (“The Word”), Eric Clapton (“Why Does Love Got To Be So Bad”), The Who (“Love Reign O’er Me”) and others by The Moody Blues, The Animals, Elton John, Paul McCartney and George Harrison. While she doesn’t improve on many of the songs, she does put her own stamp on them and doesn’t just parrot the original arrangements. A flawed album, perhaps, but the high marks make it all worthwhile.