You are here: Home / Music / Big Band / Song Of The Day by Eric Berman – “Sax-O-Phun” by George Olsen And His Music 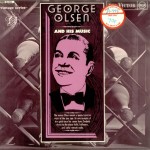 During the Jazz age of the mid-1920s, the dance band leader as personality came into vogue with Paul Whiteman, Art Hickman and George Olsen at the forefront of the trend. Their music was closely tied to that of the stage with lots of Irving Berlin, Jerome Kern, Cole Porter, George Gershwin and Richard Rodgers and Oscar Hammerstein in their repertoires. This song was recorded in 1924 and features lots of slap-tongue saxophone playing courtesy of Rudy Weidoeft. A few years later, this type of music would move from the stages of the Ziegfeld Follies to the “Our Gang” – “Little Rascals” film comedies.