You are here: Home / Music / Broadway / Song Of The Day by Eric Berman – “Jack’s Lament” by Danny Elfman from “Nightmare Before Chiristmas” 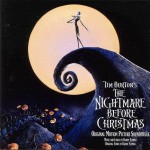 Halloween is in the air…and so is the greatest Halloween and Christmas film ever made! Tim Burton’s “Nightmare Before Christmas” has become a modern-day classic. The film had a ten-year gestation period and was released in October of 1993. The soundtrack was composed and mostly performed by Danny Elfman, who was a member of the new wave band Oingo Boingo from 1976-1995. The band had their own Halloween-themed success with their minor hits “Dead Man’s Party” and “Weird Science”  (from the film of the same name). Elfman met Burton while working with Paul Reubens on “Pee Wee’s Big Adventure,” and has scored numerous Burton films including “Beetlejuice,” “Batman,” “Edward Scissorhands,” “Batman Returns,” “Mars Attacks,” “Planet Of The Apes,” “Charlie And The Chocolate Factory,” “Corpse Bride,” “Alice In Wonderland,” “Dark Shadows” and the recently released “Frankenweenie.”  Elfman’s other credits include composing the “Simpson’s Theme,”  and music for “Pee Wee’s Playhouse,” “Desperate Housewives” (theme), “Milk,” “Spider-Man,” “Men In Black,” “Mission: Impossible,” “Dick Tracy” and many others. Pay close attention to the orchestration on this track, that’s where its magic fully lies. Elfman’s vocals are wholly theatrical and full of emotion. This song would later be covered by All American Rejects when the superb soundtrack was re-released with a bonus disc of rock covers for the deluxe edition a few years ago.