You are here: Home / Music / Easy Listening/Pop / Song Of The Day by Eric Berman – “Moves Like Jagger” by Maroon 5 featuring Christina Aguilera 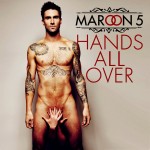 OK, this is awkward! I don’t really like much of the music I’ve heard by Maroon 5…and I do not watch “The Voice!” (I’m an “Idol” guy!) Now that that’s out of the way, let’s get down to the magic of this record. Great hook…one of the best I’ve heard in years…and a beat you can’t help but tap your toes to. I like the notion of the lyrics name checking Mick Jagger, but I wonder how many in the younger part of the target audience for this record knows who he is. And since I mentioned “American Idol” here, last night they eliminated a guy named Reed Grimm who is one of the most talented Idol hopefuls I’ve ever seen. What were they thinking? Check out his version of this song from the other night below.

Here is the Reed Grimm version from “American Idol.”