You are here: Home / Music / Classic Rock / Song Of The Day by Eric Berman – “Mr. Dieingly Sad” by The Critters 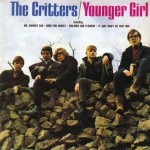 Although their name was inspired by another ’60s group, The Animals, the similarities end there. The Critters were far more easy listening than their rough and tumble contemporaries. They formed in New Jersey in 1964 around singer/songwriter and guitarist Don Ciccone. Their three top forty hits included a cover of a John Sebastian song, “Younger Girl,” “Don’t Let The Rain Fall Down On Me” which charted at #39 in 1967 and this song, their signature slice of pop ennui, reaching #17 on the charts in 1966. After the original group’s demise in 1967, Ciccone went on to join Frankie Valli and the Four Seasons and later toured with Tommy James and the Shondells.