You are here: Home / Music / Blues / Song Of The Day by Eric Berman – “Mutt Romney Blues” by Ry Cooder 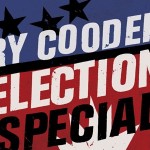 It’s election season, and Ry Cooder has made a novelty record! “Election Special” features nine very topical songs centered on the upcoming presidential election. These are songs about the issues…songs that make us think…like “Mutt Romney’s Blues” about poor Mitt’s dog who took a ride on the top of his car in a luggage rack on a Romney family vacation. Now that’s an issue we can all sing our teeth into! While I believe ol’ Ry’s heart is in the right place and politically I don’t disagree with his views, most of the songs on this record come off like bad political advertisements. Musically, the record is a two-man affair featuring Cooder’s tasty guitar playing throughout assisted by his son, Joachim on drums, but with the exception of the song “Brother Is Gone,” this record has left me cold. Oh, and as for the video…it’s a rogue video made by a fan.