You are here: Home / Music / Blues / Song Of The Day by Eric Berman – “The Plank” by The Devil Makes Three 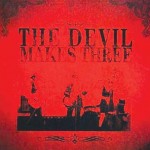 I enjoy going to music festivals even at my advanced age (for festivals) of 51 years old. Sure there’s lots of crap you’ve got to put up with…audience surges…crowd surfers…extreme weather…lethal body odor…but discovering music you would have never heard otherwise far outweighs the aforementioned disadvantages of putting yourself out there for three days at a clip. Such was the case at Lollapalooza this past summer when early on the Sunday schedule I walked up to the stage where Devil Makes Three’s set was already in progress. The trio from Santa Cruz, California of guitarist/vocalist Pete Bernhardt, banjo, vocalist and guitarist Cooper McBean and stand-up bass and vocalist Lucia Turino were already well into their set of self-penned tunes that melded bluegrass, folk, country and blues together into a roots brew that was a breath of fresh air against the steady din of electronica and metal that most of the Lolla acts offered. That’s not to say that Lollapalooza didn’t offer its share of great moments and music this summer, it’s just that it was nice to see an acoustic trio with well written songs getting some early afternoon appreciation. This song is the lead track on the group’s 2002 self-titled debut album. They’ve since released three more long players, including their latest which is a live album. In addition, Pete Bernhardt has released two solo records.