You are here: Home / Music / Classic Rock / Song Of The Day by Eric Berman – “New Lace Sleeves” by Elvis Costello & The Attractions 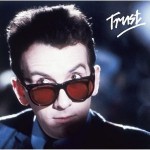 Most people’s introduction to Elvis Costello on American shores occurred with a late 1977 appearance on “Saturday Night Live” when he and The Attractions were asked to fill in as a last minute replacement for The Sex Pistols whose visas would not let them into America. It was during this performance that EC and company launched into the song “Less Than Zero” only to abruptly stop it after a few bars in order to powerhouse through their latest British hit “Radio Radio,” much to the chagrin of the NBC TV censors. The result was that Elvis would not be asked back onto the show until 1982. Between his persona as an angry young man and the abrupt quick-change of song that played out in front of American TV audiences, Elvis got lumped into the Punk Rock movement which he really never was a member. Between 1977 and 1980, Elvis Costello & The Attractions released five back-to-back albums chock full of amazingly articulate songs that established him as one of the leading British songwriters not heard since the days of Lennon & McCartney. Those albums were “My Aim Is True” (1977), “This Year’s Model” (1978),” Armed Forces” (1979), “Get Happy” (1980) and “Trust” (1980)…add to these another 20-track album, “Taking Liberties” (1980), released only in America that gathered the stray b-sides and album off-cuts, and you had the beginnings of a stunning career that still continues today. All the above albums were produced by Nick Lowe and all of them were distinctly British, typified by songs like this one from “Trust.”