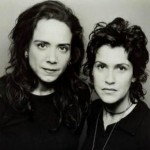 Most people know Wendy Melvoin and Lisa Coleman as members of Prince’s background band, The Revolution, during the height of his “Purple Rain” through “Parade” and “Under The Cherry Moon” purple streak. After leaving Prince’s purple reign, Wendy & Lisa went on to release several well received albums on their own while also working with the likes of Joni Mitchell, Seal, k.d. lang, Pearl Jam, Liz Phair, Sheryl Crow, Madonna, Gwen Stefani, Eric Clapton and Grace Jones to name but a few. They also wrote several television themes including “Crossing Jordan,” “Heroes,” “Bionic Woman” and “Nurse Jackie” whose theme song won them an Emmy Award last year. Wendy Melvoin’s is also part of the Melvoin musical dynasty that includes her father, Mike Melvoin, who was a member of The Wrecking Crew whose session work can be heard on hundreds of 1960s hits by such artists at Glen Campbell, The 5th Dimension, The Monkees, The Byrds and numerous other groups. Her brother, Jonathan was a touring member of Smashing Pumpkins and her twin sister Susannah was once engaged to Prince who wrote the song “Nothing Compared 2 U” about her. She also wrote songs for Madonna and Eric Clapton and has sung on sessions for Rogers Waters, Eric Clapton and Mike Oldfield.