You are here: Home / Music / Alternative / Song Of The Day and Grammy Recap by Eric Berman – “Holocene” by Bon Iver 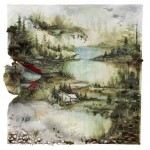 OK…time for a rant. After spending 3 1/2 abysmal hours with our friends at NARAS last night watching them trade awards for record sales and publicity, I think I have a right to complain a little about some of the stuff that passed for music that I sat through. Nicki Minaj…WFT was that? While she adds much needed novelty to tracks she makes guests appearances on, this had to the most head-scratching-devoid-of-any-musical-value “performance” of the night…and that’s a night that included “performances” by Katy Perry and Chris Brown. Then we had some of the tried and true stalwarts like Bruce Springsteen who has been regurgitating the same song for the last ten years, Paul McCartney who was redeemed by appearing twice, the second time with a Beatles medley. He was pleasant enough if you overlook the fact that on this night his voice was pretty well shot. Bonnie Raitt and Alicia Keys paid a well-deserved and well received tribute to Etta James that did not disappoint. There were a few other artists who like Keys and Raitt got up there and performed without much fanfare and let their music speak for them including Taylor Swift, who was channeling The Beverly Hillbillies with her look (thanks Deb), Cary Underwood and Kelly Clarkson who actually gave American Idol some credibility, The Foo Fighters who while out of place in today’s world of processed music, managed a full-on assault without looking like a dinosaur act and, of course, Adele who earned every award she received with a record full of real songs performed with a real voice. Jennifer Hudson had the near-impossible task of paying tribute to Whitney Houston whose death hung over the entire proceedings. While she has one of the best voices out there today, her rendition of “I Will Always Love You” only pointed out what a great loss the death of Whitney Houston really is.  Nobody could sing that song like she could. This brings us to today’s Song Of the Day. I don’t get Bon Iver. I’ve seen Justin Vernon/Bon Iver twice in person (albeit during festivals) and he’s never impressed. I have the two albums and find them to be rather dull affairs. I do, however, give him credibility for the most humble down to earth acceptance speech of the night.