You are here: Home / Music / Big Band / Song Of The Day by Eric Berman – “Sabre Dance” by Woody Herman & His Second Herd 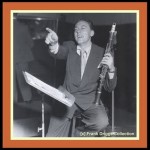